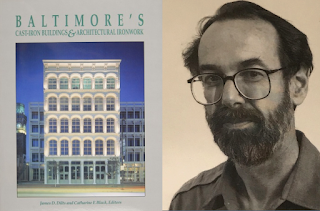 When I took over as President of Baltimore Heritage in 1988, I inherited a project that had been dragging on for years.  Championed by Jim Dilts and Kitty Black, the Baltimore Cast Iron Architecture Project was to document Baltimore’s surviving cast iron buildings, and produce a book, walking tour and museum exhibit on local cast iron architecture.

While these goals were lofty and cast iron architecture was a unique architectural contribution that had historic roots in Baltimore, I felt Baltimore Heritage had other priorities at the time.   In the late 1980s several downtown buildings were threatened with demolition; older waterfront industrial buildings faced redevelopment; and Baltimore desperately needed a master plan that stressed preservation.

So, I made the decision to put an end to the cast iron project, allowing the organization to concentrate our efforts on other priorities.  Baltimore Heritage would finish documenting the cast iron buildings and put together a walking tour (perhaps in conjunction with the redevelopment of 300 W. Pratt Street - Baltimore’s most prominent cast iron building), but forget the book and exhibit.

When word of my decision filtered back to Jim Dilts, let’s just say he wasn’t pleased.  He told me in no uncertain terms what he thought of my plan and perhaps my nascent leadership skills as the new head of Baltimore Heritage.

When he was through, I countered with a challenge.  Baltimore Heritage was an all-volunteer organization with no paid staff and little resources (meaning virtually no money).  I would be happy to support the whole project as originally outlined, book and all, but Jim would have to take the lead in raising the funds in order to complete the project within 2-3 years.  To my surprise Jim accepted the challenge with the caveat that Baltimore Heritage would back him in his efforts and allow the organization’s non-profit status to be used for raising funds.

I agreed, but frankly thought he would not succeed.  I can’t remember how much money was needed to fully fund the cast iron project, but I thought it was an astronomical figure many times Baltimore Heritage’s minute annual budget.

A few weeks later, Jim contacted me and asked me to join him to meet with an executive of Maryland National Bank in order to raise money for the project.  It was my first attempt at fund raising and I believe it was new to Jim as well.  I let Jim make the pitch on the importance of the project and Baltimore’s unique contribution to cast iron construction.  I probably chimed in with how this was an important project for Baltimore Heritage and would raise awareness of the general need to preserve Baltimore’s historic buildings.

After a few insightful questions, I was surprised that the bank executive not only agreed to a generous contribution on the spot, but also provided us with contacts of other organizations he felt would contribute to the project as well.  Furthermore, he allowed us to tell other organizations how much Maryland National was contributing to the project as an incentive to get others to support it.

We left the meeting elated.  Walking out of the bank, I may have turned to Jim and asked, “What just happened?”  I don’t remember his reply, just his Cheshire cat grin.  Success brings success.  We soon had our funding in hand.

Jim lined up authors to write chapters for the book:  J. Scott Howell on the technology of cast iron architecture; David G. Wright on the Sun Iron Building; Phoebe Stanton on the Peabody Library; and Robert L. Alexander on Architectural Iron Work, as well as a forweword by Margot Gayle, the grand dame of national efforts to preserve cast iron architecture.  Jim himself wrote the introduction, edited the descriptions in the directory of local cast iron buildings, as well as being the driving force behind the book.

There were other challenges to complete the entire project.  We worked with the Maryland Historical Society on mounting a Cast Iron Architecture exhibit.  Compromises had to be worked out with the photographer who took great photos of cast iron buildings – but felt the exhibit should have been more a show of his work, than Baltimore’s cast iron heritage.  Somehow arguments between Jim and the photographer did not come to blows, and in the end the gallery of photos in the exhibit worked out masterfully with the artifacts, historic pictures and maps that told the story of Baltimore’s Cast Iron Architecture.

I also recall a weekend walk Jim and I took preparing for the cast iron architecture walking tour.  Virtually every building we passed recalled some story or event.  I think there was a bit of one-upmanship between us on who could come up with a fact that the other didn’t know.  I treasure that interaction and regret that we didn’t take other similar walks around town.

The book, Baltimore’s Cast-Iron Buildings and Architectural Ironwork, was the first and as far as I know, the only book produced by Baltimore Heritage.  It was Jim’s baby, but I took pride in it as an accomplishment of Baltimore Heritage, while I was president of the organization.  The book helped to validate Baltimore Heritage's role in local affairs, during a time when we needed to take an activist role in preserving historic buildings.

It was the project that I tried to kill off – but Jim refused to let it die.  What began as an adversarial relationship turned into a collaboration that I hope resulted in an even better product than what was first envisioned.

Over the years I would see Jim riding his bike around town.  We would converse from time to time about other preservation issues or points of local architectural history – but basically went our separate ways.  Yet both of us continued our love of local history and architecture.

Jim Dilts was about 20 years my senior, but he always seemed timeless to me.  Baltimore is better off for his devotion and efforts to improve his adopted hometown.

I still have my copy of the cast iron book he signed for me, with the inscription “For Fred Shoken, an effective president of Baltimore Heritage and an articulate spokesman for Baltimore.”  Effective and articulate are more apt descriptions of Jim himself.